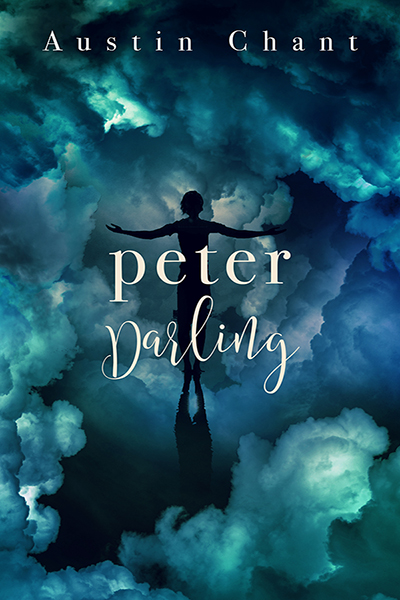 Setting aside that I’m in love with that ethereal cover, I won’t lie: during the early pages of PETER DARLING, I was immensely skeptical of the idea of Peter Pan and Captain James Hook falling in love, or of me even liking this book despite the fact that I sank into Austin Chant’s writing style with an effortless ease that doesn’t happen often; usually it takes me a chapter or two to grow accustomed to an author I’ve never read before. Chant’s effortless, lovely writing painted Peter as a vainglorious, obnoxious, murderous little shite, and Hook as a manipulative, greedy, equally murderous pillager.

PETER DARLING is at once a retelling of PETER PAN and something of its sequel; in the story it’s revealed that Wendy was Peter all along, and escaped to Neverland to be himself rather than who he was assigned at birth, a role and identity that never suited him – while in Neverland he could not only be Peter, but Peter as a cisgender boy who was able to block painful memories of what he struggled through in the real world even while deep down recognizing that this body he occupied still wasn’t quite him. (The subtle reinforcements of the wrongness of his cisgender male body were quiet but powerful, a reminder that “cis” isn’t this higher ideal to strive for.) But in the end he returned home to be with his brothers, and was forced to assume the identity of Wendy once more by parents who couldn’t see or hear the truth of what he tried to tell them about who he was, complete with quite a few tearjerking gutpunch moments depicting how they spoke to / about him and how damaging it was. Ten years later, a grown man, he reaches a break point and desperately wishes for Neverland again. Tinker Bell returns to him, and takes him back into the safety of his dream – where he assumes the whimsically savage, arrogantly warlike nature of Peter Pan once more, only to find that Neverland has moved on from the havoc that he created in his younger days, and wants no part of it. Still he persists, desperate to cling to what he sees as boyish traits that are a critical part of his security in his identity as Peter…and terrible, bloody consequences abound.

“That’s the trick of growing up. Nothing stays the same.” Hook sounded oddly sympathetic. “You see the faults in everything. Including yourself.”

The story is immensely faithful to many parts of the original, but you’ll be happy to know Tiger Lily makes no appearance in this book. As someone of partial Indigenous descent, I was cringing at the idea, but a friend was lovely enough to let me know in advance that that entire section of Neverland has been entirely omitted, which I think was a better choice than trying to somehow make it more palatable than the source material like some have attempted in the past.

You could say that the Peter we meet at the start of the book isn’t really Peter, but an escapist fantasy; this is a story, too, about identities, and how the concept of identity can differ from one person to the next. As the story progresses and Peter is forced to face the truth of Neverland, his past, and how much of Neverland has been created as a shallow construct to suit his whims, we begin to meet the real Peter: a young man desperately seeking stability in himself, and people who can accept him and love him simply and honestly as he is. At first he creates that in the Lost Boys, but when they’re nothing but echoes, fantasy constructs only able to parrot his will, he finds what he needs when the violence between himself and Hook – one of the only other “real” people in Neverland – propels them through grief, loss, mutual danger, twists, and turns to progress to an uneasy alliance, then trust, then mutual understanding before blossoming into something more. It’s done in such a natural and nuanced way that you don’t even realize you’re warming up to the characters until you’re completely in love with them, as the identities of Pan and Hook – these fairy tale caricatures of extremes – fall away to expose the subtle, very human realities of Peter and James. I nearly choked up when they shared a mutual grief over the loss of an old, old friend.

“It may surprise you,” Hook said, “but I considered her…a very good friend.”

“Once we’d settled our differences over you, we got on quite well.” Hook shot Peter a flat smile. “She always cared for you beyond reason. I should have known she’d protect you to the last.”

Though speaking of fairy tale caricatures of extremes, one thing this story does very well is examine the absolute brutality of older fairy tales. Older fairy tales were on some other shite, y’all. None of this sanitized Disney stuff. Beheadings, murders, torture, gore everywhere. Wondrously macabre, but also disturbing if you think about it for too long. PETER DARLING plunges right into that…but then gives it depth and consequences, and looks at the mortal and human aftermath of these violent and gleefully grisly extremes that often take place in fairy tales. And in doing that, it did one of my favorite things:

It humanized the villain.

Not that James Hook isn’t charming enough in his own right, without needing to be a humanized villain. He’s witty, dry, with a certain delightful panache paired with common sense and a surprising dose of patience and empathy.

“You are extraordinarily dramatic,” James said, “and no one should ever have given you power over the weather.”

But I have always loved the villains in stories, because I see myself in them more than I do in the heroes. Austin Chant talked about this in his dedication, and I rememeber @FangirlJeanne on Twitter discussed it at length in an amazing thread that I really need to dig the fuck up and link to.  Villains have always appealed to me for multiple reasons, but primarily:

That appeal is every bit as evident in PETER DARLING’s Hook, even as he sheds the role of the villain to become just a man. Still within that man is the one who wanted to be this vividly depicted, wildly flamboyant, grandiose buccaneer, sailing the seas with less care for morals than for treasure and the thrill of battle. He created this world for himself, to experience that. This is why we write and read fiction, to experience those things without the consequences. This is the dream that Peter and Hook have occupied together for so long, that lets them be larger than life without facing the terrifying and awful social repercussions so often heaped on people who try to break out of the box they’ve been assigned to.

And that’s what makes the story beautiful, and something I empathize with so deeply.

He thought he had sat by this very stream as a child, running his toes through the water, and wondered if they had been sharing dreams with each other all along.

To avoid giving away too many spoilers, the last thing I’ll say is one of the final ending notes that really stuck with me in a thought-provoking, positive way was that in the real world, as James and Peter, there was never any question of James accepting Peter as he was. No forced, awkward conversations that somehow painted Peter in the real world as less than Peter in the dream world of Neverland. Instead Peter was Peter, and James was James, and the differences they set out to explore were simply how they fit in the world as they were now, and what they would do with the next day and the next.

This is definitely going on my favorites shelf, marked as a recommended read.

His mouth was softer in this world, absent the tang of rum and salt, but something of the ocean still swept over Peter when they kissed.

It’s a beautiful story, and you’d be doing yourself disservice to pass it by.

Discover more about Austin Chant and his books at austinchant.com.

louisville bail fund’s here if you have a few spare bucks and want to do something good with them https://actionnetwork.org/fundraising/louisville-community-bail-fund/ https://twitter.com/Phil_Lewis_/status/1266190396121636864

Do you understand how much heinous sh!t had to have happened in order for protesters to set fire to the closed 3rd precinct and then light fireworks? Can you even begin to understand that much pain and anger?? 😑 #GeorgeFloyd #Minneapolisprotests #minneapolis

celebratory fireworks overtop of the 3rd precinct in Minneapolis after cops fled the building and was overtaken by civilians. if this doesn’t explain the rage and pain that society is feeling than i don’t know what else does.

This little blue bird app is really not a healthy place for anyone with melanin to be right now.

And it’s okay if you need to check out.

I have these hard candies that are super-sour on the outside but super-sweet on the inside, and even though they’re hurting my mouth I can’t seem to get enough of them.