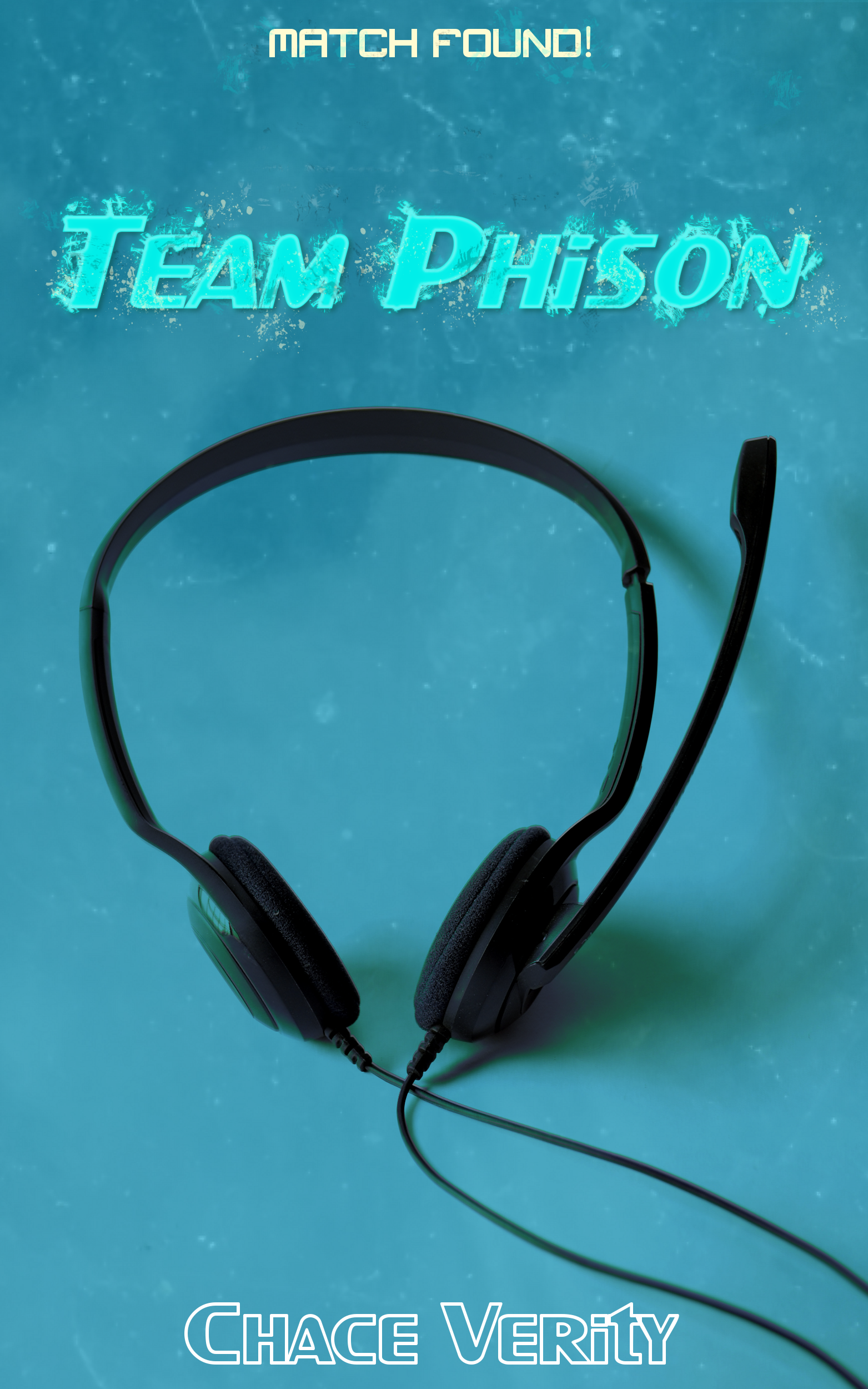 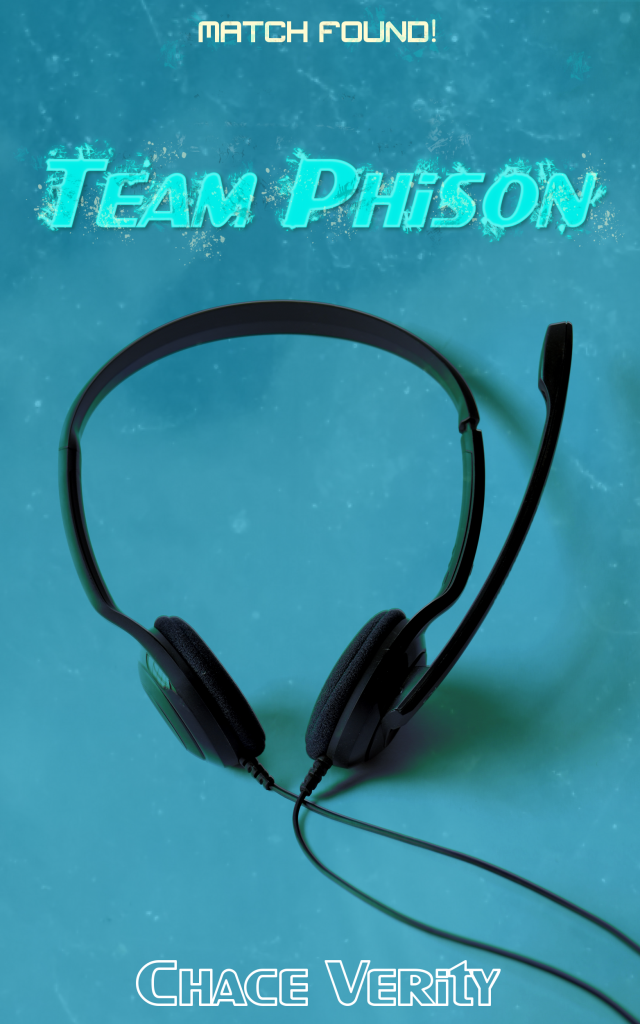 (Yeah, I know. The stars look wrong. I never made 1/4 and 3/4 star graphics, and now I can’t find my source file. Believe that the graphics represent 4.75 stars. Believe it.)

The world is going to shite. Life as we know it is basically all burning, all the time. My brain screams 24/7.

Which is why TEAM PHISON was exactly the read I needed to take my mind off things for a while, and leave me with a feel-good smile that lasted for days.

Phil Hutton is many things: a cynic, a restaurant owner, a gamer, a firm disbeliever in romantic connections after a bad relationship burn. One thing Phil isn’t is over the hill, but good luck convincing him that 55 is the new sexy as hell when he’d rather stay at home and play MMOs than endure another disastrous first date.

I swipe through the six new potential loves-of-my-life and hate them all equally.

Basically Phil is me in 15 goddamned years, and I love him for it.

And I love him for his gruff, sweet, awkward vulnerability, and how it peels back layer by layer the more he falls for his newest in-game teammate, BisonFalls.

BisonFalls is actually twenty-something Tyson Falls; Tyson of the soft Southern accent, of the overly effusive laugh, of the dorky charm. And Tyson is well on his way to being Phil’s downfall, when what starts as an in-game partnership soon turns into a long-distance relationship sizzling with enough sweetness, emotional tension, and sexual frustration to melt every fiberoptic cable between Cape Cod and Atlanta. There’s a reality to the budding relationship that’s so easy to relate to, effortless and honest and full of the little imperfections that make us human rather than flawlessly built sex gods with just the right amount of stubble on our clean-cut, swooping jaws.

It’s that realism that makes this book so engaging.

Phil and Tyson feel like real people, right down to what complete and utter dorks they are.

And trust me, they are dorks. Forget smooth one-liners and clever quips. These two are the cheesiest goofballs, and the things they blurt out would mortify you if you said them out loud.

Especially dorks who defy conventions the way Phil and Tyson do. TEAM PHISON is an age gap romance, but it’s not just the decades that separate the lovers. Phil is a Cape Cod queer, foul-mouthed and down to earth but a touch snobby about his standard of living–and more than a little elitist when it comes to the restaurant he owns and manages. Tyson is a waiter in the kind of Georgia dive where Phil would be afraid to eat off the dishware, and lives a simple life that, without ever overtly confronting it, makes Phil begin to question his own snobbery. With those particular plot elements, you’d expect the story to be predictable.

What it is, though, is positive, uplifting, affirming, breathless, and often hilarious.

Fucker. I wish I could rate dates online like people can rate my restaurant on Yelp and Zagat. He’d get a goddamn one-star with a long description of all the ways he can lick my hairy nutsack.

Just a few things I loved:

Phil, look at how hard you’re making me. You know you’re attractive.

Chace Verity has a clean, seamless writing style with a talent for telling a story that moves quickly, effortlessly, without feeling rushed. TEAM PHISON is a fast read not just for the length, but because Verity’s writing absorbs you quickly into a strong voice with a wonderful sense of immersion. The author knows exactly when to stop for a moment to indulge in sigh-worthy lines such as “Our mouths meld together into a paradise of silk and satin,” without ever slowing the momentum of the story.

It’s been a long time since I’ve been so miserably euphoric.

All in all a highly recommended read, especially if you’re looking for something feel-good to remind you of all the little things right in the world.

So why the quarter star knocked off a perfect rating?

This book has a smorgasbord of diversity rep across LGBTQIA+ and various ethnicities, as well as nods to disability rep. It was really great to see; Phil is surrounded by people from all across every rainbow and their intersections, which accurately reflects a reality that too many books whitewash and straightwash out. What made me uncomfortable was how it was pointed out; people of color were basically introduced as “the ________ [person]” even after being assigned a name and a role in the story. The “tall, gangly Black chef.” The “dark-haired host,” which, when paired with her name–Fatima–is an awkward way of suggesting she has roots in an Arabic-speaking country.

Frankly, I’d be super-uncomfortable knowing a white person I was on a first-name basis with thought of me as “the Blasian writer” in their head as they narrated their way through their day.

Overall it wasn’t painful to read. It didn’t make me feel bad. It did make me blink and go “oh, okay, I…guess?” because it didn’t feel natural to call it out that way, the way someone comfortable with POC in his general environment would. It was more like pointing and saying “Look! A Black man is over there! A potentially Arab or Iranian or Syrian or [insert list of Arabic-speaking countries here] woman is over there!”

It was handled a little more deftly with queer and disabled folk, but still felt awkward in a way that made me wince a bit, almost out of secondhand embarrassment. There are ways to smoothly blend various representations into a narrative without making it feel unnatural from the POV of someone who would be too familiar with the people around him to consciously call out these traits as part of his inner narrative.

Organic. That’s the word I was looking for. It didn’t feel organic.

It’s a minor nitpick, though, and not an egregious offense. It came from a good place, and I’ve seen people do far, far worse in trying to handle diversity rep. This was subtle, inoffensive, just a little odd–and I’m likely the only person who’d stumble on it. I’m still happy to see that Phil’s environment was portrayed as richly diverse and varied, and that both Phil and Tyson were surrounded by the love and support of chosen family.

Overall, I would recommend TEAM PHISON if you need a story that just makes you happy. A story that’s a joy to read, to live every moment in the pages and not want to let go, even when it’s over and the story is done.

If I could capture one moment of my life in a bottle, it would be this one.

Discover more about CHACE VERITY and their books at chaceverity.wordpress.com, or follow them on Twitter at @chace_verity.

Why I love my Discord writing GC:

When explaining the lore behind this zombie story I’m working on and how the revenant monster LI retains his human consciousness despite being mutated, the first question is, “Okay but is fucking infectious?”

This Jelani situation not sitting right with me. We need to know the cause of death ASAP. Also they discovered the body September 4th how did it take so long to identify that it was him? This entire situation BEEN fishy