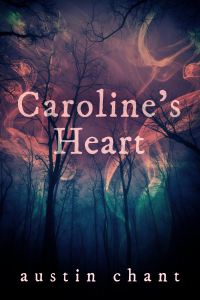 It’s no secret that I love Austin Chant’s writing, and the smooth, effortless way he weaves a story with a powerful sense of character, atmosphere, and enchantment. His writing is fluid, both weighty with meaning and delicate in word choice, craft, and construction. Chant has a tendency to take my expectations of a story and turn them on their heads, leaving me pleasantly surprised and longing for more. CAROLINE’S HEART is no different, making for a haunting, lovely, utterly satisfying read.

The heart knows its duty well. It hardly needs an invitation to begin beating.

Even if CAROLINE’S HEART arrived with the Halloween season and has an enchantingly haunting cover, it’s less horror and more a pleasantly spooky paranormal with a “what if Salem were in Texas” vibe. In this well-paced novella, Roy is a cowboy with a secret: he’s not quite like the other men. He was born male, but arrived at it by a slightly different path that others wouldn’t understand or accept in that time period. So he keeps his own counsel, rarely speaks, and is immensely careful about how much of his body he allows others to see. It’s an isolating existence, one that often leaves him withdrawing from others.

Until he meets the witch.

Cold and defensive, at first Cecily is annoyed by Roy’s eager curiosity, unwilling to let anyone close for reasons both deeply personal and startlingly similar to Roy’s. Yet Roy’s own employer throws them together, giving Roy a chance to pursue his curiosity…until it leads to a catastrophe, and the only way to save his life is for Cecily to give up the most important thing to her in the world.

The reluctant — at least on her part — romance as Roy recovers is charming, and fraught with secrets of a heavy heart. Secrets both personal and supernatural; secrets both quiet and stunning. Secrets she’s carried alone for far too long, and yet Roy is willing to help bear their weight if only she’ll let him in, trust him, and give them both the opportunity to accept each other for who they truly are.

She looks straight at him, not in the forthright way that some people do, but like a cat watching an insect.

“I knew as soon as someone told me, which was when I was quite young.”

In the end this paranormal romance is a deeply human story about love, grief, and acceptance, told against a backdrop that carries the same breathless wonder as a dark fairy tale. It reminds me of the pure childlike delight I feel when watching something such as The Nightmare Before Christmas or Corpse Bride, taking something that should be macabre and weaving it into the delicate framework of something beautiful and heartfelt.

The human body is a complexity of anchors and pulleys, but Cecily has devoted herself to understanding it, tailoring the tension and slack of each spell-thread until the prosthetic leg can bend and stretch gracefully.

Chant weaves a story that moves with a machinery as smooth as Cecily’s prosthetics, resulting in a satisfying read that I would recommend for anyone who loves haunting romance.

Discover more about AUSTIN CHANT and their books at www.austinchant.com.

Me: *rereads his own Twitter feed for the last few months*
Me: *squinks up face*
Me: …I’m doing so much better on the antidepressants, but goddamn all I ever do is post depressing shite.

Here’s my not-so-vague publishing tweet! I’m going to have a book out in the world! I am screaming on the inside and outside!

At least five attacks at electricity substations in Washington and Oregon, including two at Puget Sound Energy substations, have been reported to the FBI in recent weeks. https://st.news/3P9aHyl

Autism Speaks- A charity that advocates for eugenics.

Easily support even more of the causes you care about around the world, without Twitch taking a cut.

Learn all about it: https://twitch.app.link/KG9sJxabcvb

FYI my email is dead for a bit, if anyone is trying to reach me. GoDaddy migrated all email to Office365 and I have to reconfigure both my personal and professional email addresses on multiple devices to be able to log in and synch across devices. Should be fine by tomorrow.