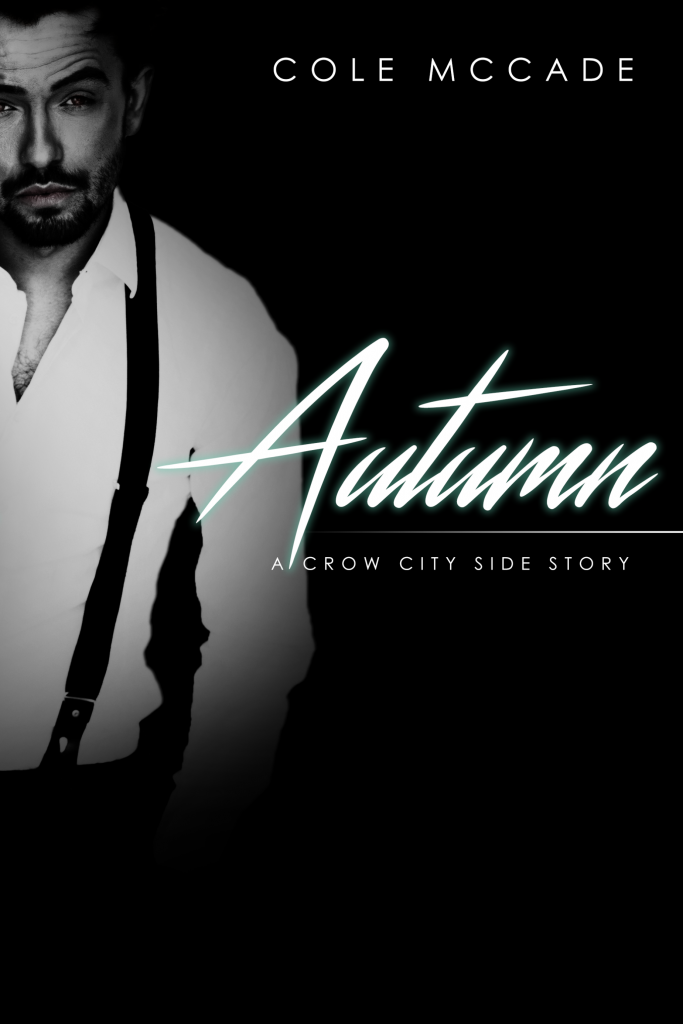 AUTUMN
A Crow City Side Story

There are worse things in life than loving a man who hates you.

Ever since a ghost from his past kidnapped his niece, Willow (THE FOUND, Crow City #2), Wally’s life has been nothing but grief, turmoil, and loss. With no idea if Willow is dead or alive, Wally’s only comfort is in caring for his grieving brother-in-law and Willow’s father, Joseph Armitage. For the past twenty years, Wally has never hoped to be anything but the backdrop to Joseph’s life; between marrying Wally’s sister and decades of mistakes building walls of enmity and resentment between them, Joseph has been firmly cemented in Wally’s mind as unattainable.

But the pain of Willow’s loss forces them to face the demons sleeping between them, find common ground—and more. Together, they explore mutual grief. Shared memories. Quiet respect. Warmth. Camaraderie. The joy of learning to live again.

And an unspoken attraction, buried beneath the scars of hurtful words and terrible missteps.

Yet even as they work through the thorns and tangles of old wounds, Joseph has his own struggles to face. The struggle to leave his ex-wife in the past. To let his daughter go. And to trust Wally to love him, to see him as more than just his multiple sclerosis, when so many have treated him as less than a man. The only way forward for them both is forgiveness. Trust.

And a second chance to discover what it means, to truly be in love.

“Take it while I’m being sentimental.” With a mock-snarl, Joseph tumbled them both over onto their sides, pinning Wally with a leg draped over him and burying his face in his throat to bite and lick and nuzzle until Wally was laughing, pushing at his shoulders.

“Nope.” Joseph bit his jaw lightly, then laughed and burrowed into him. “But FYI, I’m a pushover after sex. You should take note of that for future reference.”

“Just a page out of the Joseph Armitage handbook.”

“And what would that be? The Proper Care and Feeding of Boyfriends?”

Joseph stilled. “Is that what we are?”

Oh. Well that was…quite a bit more of a question than whether or not they’d be having sex again, wasn’t it? And still Joseph was so unreadable, simply watching Wally quietly, yet his body language was lazy and relaxed—and Wally didn’t think he’d be this lax and lovely stretch of warm sinew and masculine ease if the idea made him so very angry.

“If you’d like to call it that,” Wally ventured shyly, a small tremor taking hold of his heart. “I could call it many things.”

“A tryst. A liaison. An entanglement. Or…a second chance at what could have been.”

A slow smile broke over Joseph’s face, a dawning that crept up one second at a time until between one breath and the next it bloomed into something that snared Wally’s heart in bright-burning tangles. “Yeah?” he asked, and Wally let out a flustered laugh.

“I like that.” Joseph chuckled and kissed the top of Wally’s head. “But ‘boyfriends’ is less of a mouthful.”

NEWSLETTER SUBSCRIBERS! Right now in your inbox is the first chapter of Turnt Up!

BFF holding me accountable to stay fully off all social media (except Discord, Discord doesn’t count) for an entire week, not just lurking without posting/engaging.

You don’t have to be trans to understand the importance of respecting trans people and affirming their identities.

Life is just too short. I can’t imagine how it makes any sense to use one’s fame and resources to put others down.

There have always been trans kids. This is nothing new. Letting them live their truth will save their lives.

To all the trans kids and families who love them, in Texas and around the world: stay strong and keep fighting for your freedom.