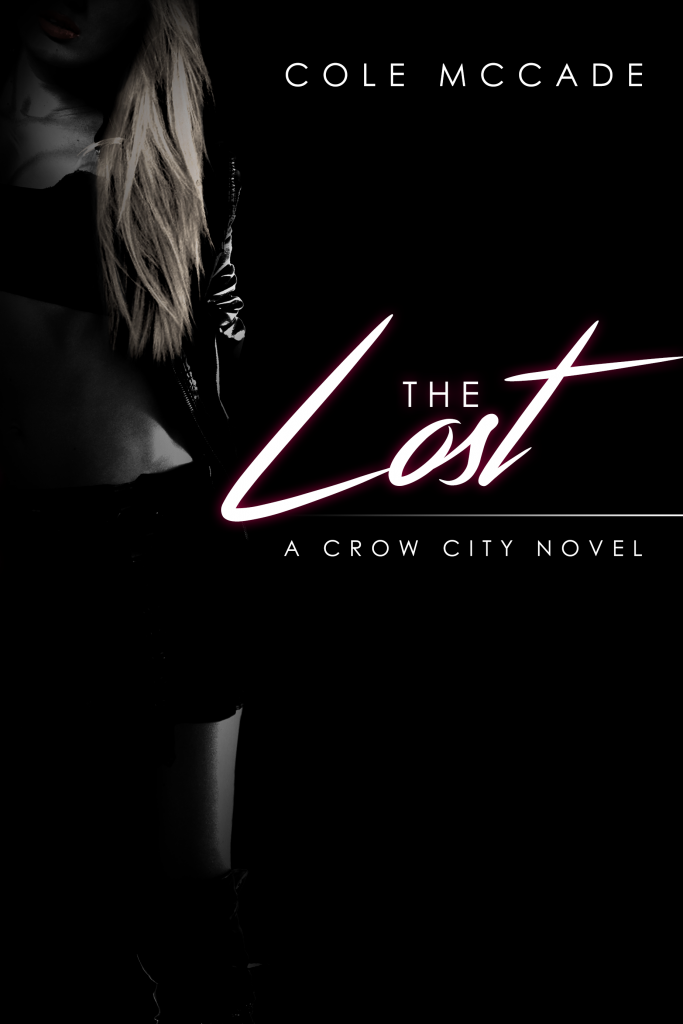 THE LOST
A Crow City Novel

Darkly haunting erotica with the taboo appeal of V.C. Andrews.

Praise from Publishers Weekly: “If the romantic character study is a genre, this fascinating contemporary novel is its exemplar. McCade digs deep into the difficult topics of rape, incest, and sexual abuse via the remarkable voice of Clarissa Leigh VanZandt.” [Read Full Review]

There’s something wrong with Leigh.

She’s known it her whole life. She knows it every time she spreads her legs. Every time she begs for the pain, the pleasure, the heat of a hard man driving deep inside. She’s a slave to her own twisted lusts–and it’s eating her alive. She loves it. She craves it. Sex is her drug, and she’s always chasing her next fix. But nothing can satisfy her addiction, not even the nameless men she uses and tosses aside. No one’s ever given her what she truly needs.

Cold. Controlled. Impenetrable. Ex-Marine Gabriel Hart isn’t the kind of man to come running when Leigh crooks her pretty little finger. She loathes him. She hungers for him. He’s the only one who understands how broken she is, and just what it takes to satisfy the emptiness inside. But Gabriel won’t settle for just one night. He wants to claim her, keep her, make her forever his. Together they are the lost, the ruined, the darkness at the heart of Crow City.

But Leigh has a darkness of her own. A predator stalking through her past–one she’ll do anything to escape.

Even if it means running from the one man who could love her…and leaving behind something more precious to her than life itself.

TRIGGER WARNING: 18+
This book contains material that may be triggering or deeply disturbing to some readers, including scenes discussing or detailing rape, physical and emotional abuse, and incest. Please focus on self-care and, if this book is triggering to you, do not be afraid to put it down and walk away, or skip certain chapters. Be good to yourselves.
-C

A pair of worn combat boots stuck out from under the Impala like the Wicked Witch’s ruby slippers. Leigh smiled to herself, tugged her earbuds out, and tip-toed closer, listening to the scuff and clang of rough hands at work. She stopped next to a pair of long legs in dirty, frayed jeans, rested her hands on her knees, and bent to watch, holding her tongue.

“You do know I can see your shadow.” A low, gritty voice drifted from beneath the Impala. Dry, coolly masculine, inflected with a certain cultured, exacting articulation, yet rough about the edges—as if he spoke so rarely his voice was rusty, ill-used. That roughness brushed over her skin like chill breath, and she shivered. That voice didn’t belong in the light of day.

“Ghosts aren’t supposed to cast a shadow,” she said.

A humorless, mocking chuckle slid from beneath the Impala, followed by a long, ferally graceful body: a stark man, defined by absolutes and keen edges. Chill gray eyes, pale as cracked ice. Hair as black as the sea at night, sharp-cut and falling over one eye, spilling against the cracked wood of the creeper beneath him and touched with thin threads of shooting-star silver at the temples. Older, she thought, from his hair and a certain dignified elegance to his stubble-shadowed jaw. Tanned, scarred skin stretched over broad shoulders. Sweat and grease stains darkened his thin white A-shirt. His tattoos said ex-military, jagged silhouettes of fierce-sweeping wings and a pointed beak in the stark style of the Arapaho, turning his right arm into a canvas from shoulder to wrist, slick black oils painted on burnished gold. He stretched out atop the creeper in a long, lazy sprawl and looked up at her, guarded and impenetrable. Something about him spoke of cold precision. A gunsight in human form, locked on and ready to kill.

And when he looked at her as if he could see right through her, see through the transparent empty pointlessness of her, Leigh didn’t just feel like a target.

She straightened and looked away, tucking her hands into her pockets, her stomach shivering and light. “This your place?”

“One witch, at your service.”

“She’s contrary as a very witch herself,” she quoted, a smile trying to creep over her lips if only she’d let it. She bit it back and studied the Impala—watching him only from the corner of her eye. “You done working your magic on Gary Mitchell’s car? I’m supposed to pick up.”

“You’re Leigh, then.” He rolled to his feet with easy grace. He moved like an animal, something savage under his skin, behind those unreadable eyes. Something wild that pulled at Leigh like the jungle calling to a beast that had spent its entire life behind bars. She lingered on his hands, large and cruel and rough-cut as raw granite, as he wiped his fingers clean on a rag. “Just finished final inspection. You sure you’re big enough to drive her? She’s a brute.”

“My feet reach the pedals, Daddy.”

A forbidding stare pinned her. “Cute.”

Nothing else. Just that hard, steady stare while he stood over her, feline and powerful as a black-spotted leopard, lazy strength looming tall until she was a child in his shadow, beneath the weight of his gaze. He didn’t look at her the way most men looked at her. Like they were eyeing her pale pretty thighs and tiny skirt and slight, girlish body and wondering if she was street-legal, wondering if she’d let them go for a test drive to find out. There was a certain kind of man who went for the dirty grunge princess look, pure heroin chic, all smeared eyeliner and kiss-swollen lips, and normally when she made eye contact she knew with a certain click of rightness that she’d found a place to sleep for the night. Even the ones who didn’t want to fuck her, she could still tell what they were thinking—but not him.

He was a glacier, and she found herself wanting a name just to make him human.

Discover more about Gabriel Hart – and who he was before Leigh.

Reconnect with Gabriel Hart, Maxi, and Gary in Gabriel’s prequel novella, THE FALLEN – now free on Amazon and other retailers. Discover Gabriel’s story before Leigh entered his life, just what it took to break him…and just what put him back together again.

Exclusive: meet Priest, the hero of THE FOUND, and get a sneak preview of the darkly sinister man who was once one of Gabriel’s closest friends. [Read an Excerpt]

NEWSLETTER SUBSCRIBERS! Right now in your inbox is the first chapter of Turnt Up!

BFF holding me accountable to stay fully off all social media (except Discord, Discord doesn’t count) for an entire week, not just lurking without posting/engaging.

You don’t have to be trans to understand the importance of respecting trans people and affirming their identities.

Life is just too short. I can’t imagine how it makes any sense to use one’s fame and resources to put others down.

There have always been trans kids. This is nothing new. Letting them live their truth will save their lives.

To all the trans kids and families who love them, in Texas and around the world: stay strong and keep fighting for your freedom.