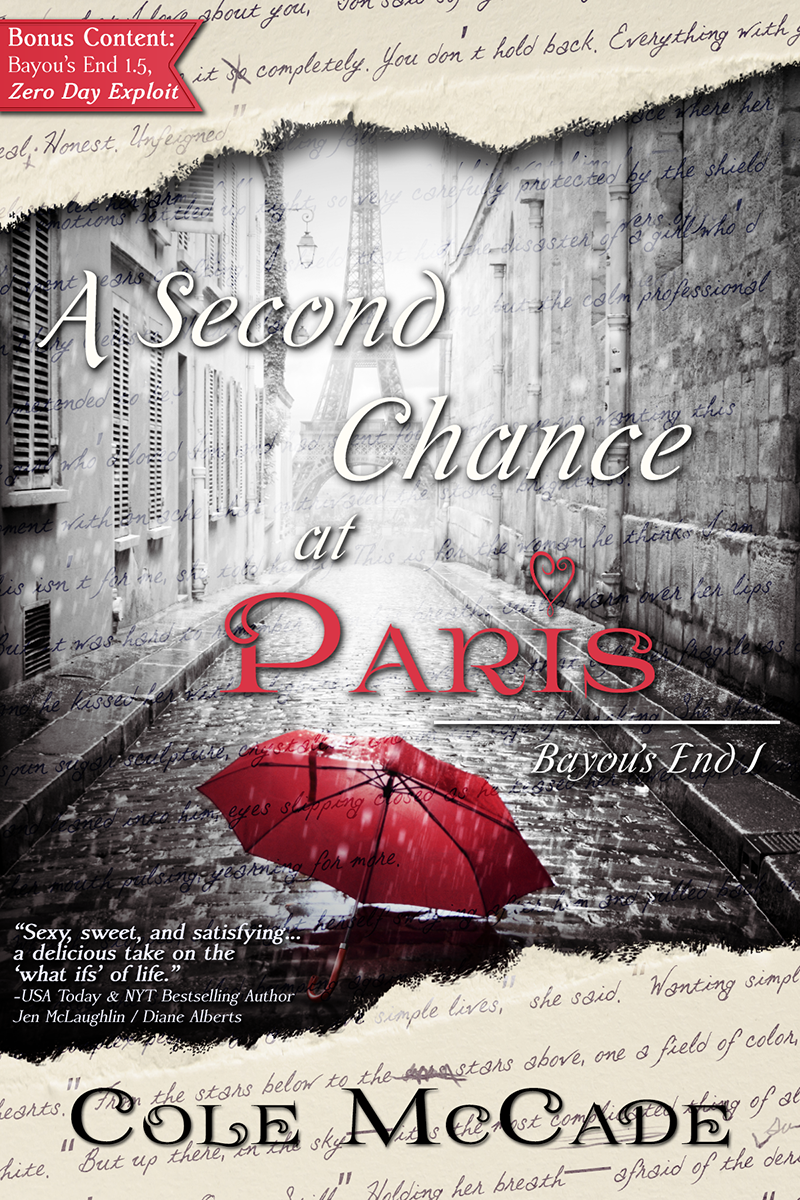 A SECOND CHANCE AT PARIS

Bayou’s End #1
One week in Paris. One chance with her childhood crush. And one lie that could ruin it all.

Before she was Dr. Celeste London, Astrophysicist, she was Mary Celeste Haverford: dork, loser, the geek formerly known as Hairy Mary. But she’d left all that behind–and left Ion Blackwell behind, nothing but an unrequited crush and the memory of a high school field trip, a night in Paris, and the words Celeste never had the courage to say. She’d never expected to see him again…until a surprise encounter on a Parisian riverboat tour brings him back into her life, and gives her the opportunity to start over as someone new. Someone Ion doesn’t recognize, transformed from a social outcast into a polished, professional woman that Ion doesn’t realize is the girl he’s been longing for since childhood, the ideal he’s dreamed of his entire life.

Suddenly this vivacious (if charmingly awkward) “new” woman is teaching him that real love is better than any dream–but Celeste is hiding more than her identity. Hiding something that makes it hard to trust her increasingly erratic behavior, and her frequent secretive phone calls. When the truth comes out, the deception could shatter them both…unless they can give each other a second chance, and take a risk on love.

With a smile, Celeste leaned on the rail. She’d been a silly girl, heart on her sleeve, but she kind of missed that. Falling in love was never the same—never as light, as sweet, as guileless, the emotion not as raw or real when it became about work schedules and who paid for dinner and whether it was too soon to have sex. Mundane things took the romance out of it, when at sixteen it had been about wishing for that one perfect, breathless, magical kiss with that special someone who didn’t even know she was alive.

Now she just had a half-dozen ex-special someones who said she was an amazing friend, but a lousy girlfriend.

Her eyes stung. She should be standing here with…someone. People did that; they fell in love and took romantic trips to Paris, and cuddled on dreamy moonlit boat tours. But even then she’d have been worrying over her presentation for tomorrow, wondering if Ophelia gave their father his meds, pondering wind speed for Kelvin-Helmholtz instability in Jupiter’s Red Spot, picking out constellations…and never quite here with the imaginary boyfriend.

She really wasn’t cut out for relationships.

She lifted her gaze to the sky and picked out Venus. It hurt, when she smiled. “Guess I wasted a wish,” she whispered. “Do I get a do-over?”

The soft scuff of a sole against the deck warned when someone approached. She straightened, rubbed her eyes, and pulled her hoodie tighter around herself. Last thing she wanted was to ruin some happy couple’s romantic Parisian night when they stumbled on a single woman on the verge of a nostalgic crying jag. They’d probably think she was pulling a Rose, about to fling herself dramatically over the rail of the mini-Titanic.

The footsteps stopped at her side, barely a foot away. She caught a sense of height, masculine body heat, a quietly commanding presence. A low voice rolled over her, husky baritone like whiskey and silk.

Fathomless blue eyes looked over the water, set in an elegantly sculpted face: ten years older, more weathered, tanned complexion darkened by the shadow of stubble—but so distinctive she’d know him anywhere. She clutched the railing with fingers almost numb to the cool metal, blood draining to leave them rubbery. She knew him. She knew him, but there was no way it could be him. It was impossible. It was incredible. It was absolutely unbelievable, and she had to be hallucinating.

It was Ion Blackwell.

…I am completely failing at being in any way stoic and manly about this, you guys. I’ve been working so hard on this with cover design and editing and everything, and it’s all coming together and I’m just torn between this sense of utter satisfaction………..and totally freaking out.

2 thoughts on “Cover Reveal: A SECOND CHANCE AT PARIS”